Herman Chan joined Freedom 55 Financial in the York North Financial Centre as a Director, Business Development in February 2011. Prior to joining Freedom 55 Financial, he spent 2.5 years running an RBC Insurance branch in Scarborough and also held management positions at HSBC and Future Shop in the greater Toronto area since 2003.

He is originally from Vancouver, B.C., and graduated from Carleton University with a journalism degree. In 2014, he completed the Certified Health Insurance Specialist (CHS) designation and the CERTIFIED FINANCIAL PLANNER® (CFP®) designation in 2018. When he’s not busy recruiting, developing and assisting financial security advisors, he enjoys playing basketball, golfing and spending time with his daughter, son and wife.

After graduation Carol worked for Reynolds Extrusion for a year before she started he career with Prudential in 1980 at the Canadian Head Office. Carol worked in the Investment and Treasury division until 1986 when she transferred to the Century District Field office as a Senior Customer Assistant.

Following the merger with London Life in 1996, Carol assumed the role of Marketing Associate with the Richmond Hill branch. Carol provided a high level of sales support to several top Advisors, as well as the Management Team, to drive sales results and achieve production targets. In May 2003 Carol was appointed Acting Operations Manager of the Freedom 55 Financial York North Financial Centre and in October 2004 she was promoted to the Operations Manager position. In 2017 Carol was appointed to the role of Sales Support Manager at the Toronto Northwest Financial Centre.

Carol is married with two sons and resides in Richmond Hill. 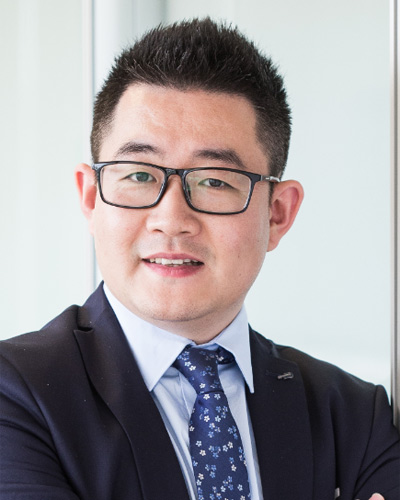 Johnson graduated from Western University with a Bachelor of Management and Organization Studies in 2007. He is married with two sons and resides in Vaughan.

Eli Sun, Director, Business Development at Freedom 55 Financial - Northwest, joined London Life in 2014, drawing on 10+ years experience of career coaching, training, and business management in the international-based industry. He is dedicated to helping advisors focused on their business development and career advancement.

Michelle joined Freedom 55 Financial as a financial security advisor in 2015 after a 10-year career in financial services in Shanghai. Michelle is a graduate of Shanghai Jiao Tong University with a B.Sc., she attained an M.Sc. from the Technical University Munich and has a Postgraduate Diploma in Corporate Finance and Investment Management from the Hong Kong University.

Jean uses her experience as a Certified Financial Planner to train new financial security advisors about financial concepts and sales processes. After many years of helping high net worth executives and their families achieve their financial goals and dreams, Jean now trains advisors to help their clients achieve financial freedom. Jean enjoys the challenge of working with advisors and the reward that comes from seeing her advisors succeed.

Graduated from the University of Waterloo with an honors degree in Mathematics (major in Actuarial Science), Jean has worked in the banking and financial planning industry for over 20 years. She has completed the Canadian Securities Courses, Derivatives Fundamental Course, Options Licensing Course and Futures Licensing Course. Jean holds the CFP, CLU and CHS designations.